Cassils was awarded The International Prize for Live Art in 2014. As part of this prize The Powers That Be (210 Kilometers) was commissioned as a site specific work for the ANTI Contemporary Art Festival in Kuopio, Finland. Cassils is reworking this piece for a U.S. premiere, April 2, 2016 at the Broad Museum.

For the live Los Angeles performance Cassils collaborates with fight choreographer Mark Steger to stage a brutal two person fight. Lit by car headlights and performed in the depths of a parking garage, Cassils is the sole figure, left to spar with an invisible force. Amplified by surrounding car stereos is a score designed by Kadet Kuhne comprised of static noise and samples found on the radio. Broadcasting issues reflective today’s sociopolitical climate, both proximate and distant, The Powers That Be, explores the radical unrepresentability of certain forms of trauma and violence. Smashing the weight of accountability directly on everyone involved, this piece is designed to be viewed and recorded with a mobile phone.  Cassils addresses mediated images of violence by calling into question the roles of the witness and the aggressor. 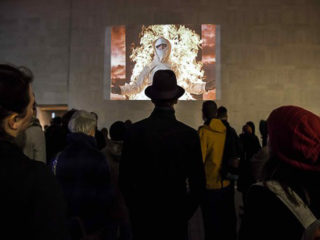